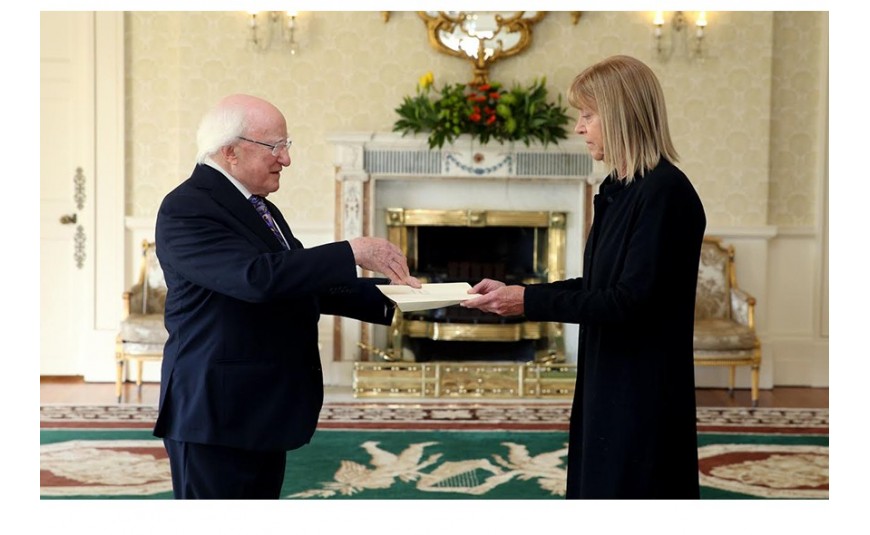 Laura Bernal was appointed Argentine Ambassador to Ireland in 2015 and fulfilled her role with dedication and enthusiasm until her untimely and sudden death earlier this month. In addition to being a conscientious and effective representative of Argentina in Ireland Laura was a lovely, kind and considerate individual. Laura was one of those persons that was able to deploy the necessary seriousness and gravitas to her role as ambassador while retaining a natural friendliness that made anyone that met her feel comfortable and relaxed in her presence.

The fact that her funeral took place in Foxford, Co Mayo is testament to the strong ties that she built up with Ireland during her short sojourn in this country. Many people will be aware that Foxford is the birthplace of Admiral William Brown, the founder of the Argentine Navy and Laura had visited the town on a regular basis in her capacity as ambassador, the last time being when she accompanied a large delegation of around 200 naval personnel from the frigate ARA Libertad.

Due to the ongoing Covid 19 pandemic it was not possible to attend the funeral. In fact due to the social distancing rules, the funeral mass at St Michael's Church was attended by just 10 people. The ceremony was relayed live on webcam, so that Laura’s many friends and relatives from all over the worlds could watch it. Papal Nuncio to Ireland, Archbishop Jude Thaddeus Okolo, was one of the celebrants at the mass. President Higgins was represented by his aide-de-camp, Lieutenant Colonel Stephen Howard. Representatives from the Admiral Brown Society in Foxford were also in attendance. In his homily, Archbishop Okolo described Laura as a careful, kind and considerate person, who had impacted on the lives on many others.

The funeral was organised by Diego, Marcelo, Nicolas and the team at the Argentine Embassy under the most difficult circumstances imaginable. Allowing for the sadness of the occasion it was a lovely, dignified and moving ceremony. After the ceremony one of Laura's nieces who lives in Paris said a few words and sang a song.